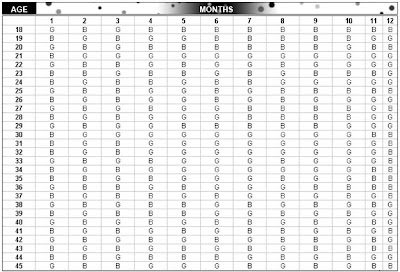 Ancient Chinese Gender Prediction Chart The Ancient Chinese Gender Prediction Chart is said to help parents predict the gender of their baby based on the Mother's age and the month of Conception. This chart is said to have been drawn by a Chinese scientist about 700 years ago.
The chart has been taken from a Royal tomb near Peking, China and the original copy is kept in the Institute of Science of Peking.

The accuracy of the chart has been proved by thousands of people and is believed to be 99 percent accurate. Use the chart below if you were between the ages of 18 and 31 at the time of conception. Find your age along the left hand side, and the month of conception along the top row. Find where the two intersect to find the prediction of the sex of your baby! This chart is for entertainment value only. Although the results have been found to be incredibly accurate, Woman Conception Lunar Month